An overview of what TRLs are, and how DOCAN uses this method to help clients bring their ideas to life.

If you’re new to the field of design or engineering, you may have heard the term ‘Technology Readiness Levels’ which is used to describe the development pathway of products and systems.

The terminology is used across a range of industries and is something we implement ourselves here at DOCAN. We recognise that not everybody understands what it is or what it means, so this blog aims to give you a brief overview of the method, and how it’s applied in engineering.

What are Technology Readiness Levels (TRLs)?

Developed by NASA, TRLs are a method used to measure and understand the maturity level of a piece of technology throughout the research, development and deployment stages.

The scale can be used to assess any technology, product or system, in order to determine exactly what stage the project is at in terms of readiness, and make informed decisions about its ongoing development.

Whilst originally developed to measure the maturity of space exploration technology, the approach has been adopted by multiple industries as it provides a consistent reference point in managing the progress of R&D throughout the timeline of a project.

From concept to completion through the TRL levels

With a lack of guidelines, utilising TRLs and advancing your concept through each level takes a high level of expertise and knowledge, as the lines can be blurred in terms of how you follow this process.

As an engineering consultancy, DOCAN are well versed in TRLs and deploy this method of working when helping our clients’ ideas come to fruition. If you have an idea or a concept but don’t know how to progress it, we can help.

Through our Initiation & Development of Engineering Application Services (IDEAS) we have helped many start-up projects push through the TRL levels to get them to a stage where they can prove their credibility and secure the funding they need.

Read more about the service here or get in touch with us to find out how we can help you.

TRLs are based on a relatively simple structural scale from 1 to 9, with 9 indicating the most mature technology which has been proven operational.

This is the lowest level of technology readiness, which indicates that initial scientific research has been conducted and is beginning to be translated into applied R&D. This may include something along the lines of paper-based studies into the basic properties of the technology.

This level occurs once the basic principles are observed and practical applications can be applied. At this stage, envisioned applications are speculative and may lack detailed analysis to support them, with little experimental proof-of-concept.

A technology gets raised to level 3 when active research and development is initiated. This stage requires both analytical and laboratory studies to prove the technologies viability and validate the analytical predictions of all elements. During this stage, a proof-of-concept model is typically developed.

Projects advance to TRL4 once the proof-of-concept model is ready, and the components can be tested to establish that they will work together. Here, the results of the experiments will prove if applicable performance targets may be achieved based on the modelled system.

TRL5 is a continuation of TRL4, but with an increase in fidelity of both the eventual operating system and environment to the actual application. Tests are conducted in a simulated operational environment with the key aim to significantly improve the reliability of the technology, by comparing the results to real-life expectations.

Once a technology has passed the testing stage at TRL5, a fully functional representative model or prototype system may be developed, which is a far more advanced engineering-scale model. This system is then tested in a relevant environment that closely represents the actual operating environment.

TRL6 is a huge step up from TRL5 as the technology is taken from laboratory scale to engineering scale. During this stage, the results should allow the cost model to be refined and engineering risk to be reduced.

A technology reaching TRL7 is a huge leap forward, as this indicates major technological maturity and near completion of the final design of the actual system. This stage requires the demonstration of an actual system prototype in a relevant operational environment.

A TRL8 technology has been fully developed, tested and proven to work in its final form under the expected operating conditions using the information generated from TRL7 to manufacture a complete product. At this stage, development is considered to be finished and the system or product is ready for implementation.

This level signals the end of research, development and testing. A technology in its final form which has been implemented and proven successful in operation can be called TRL9. 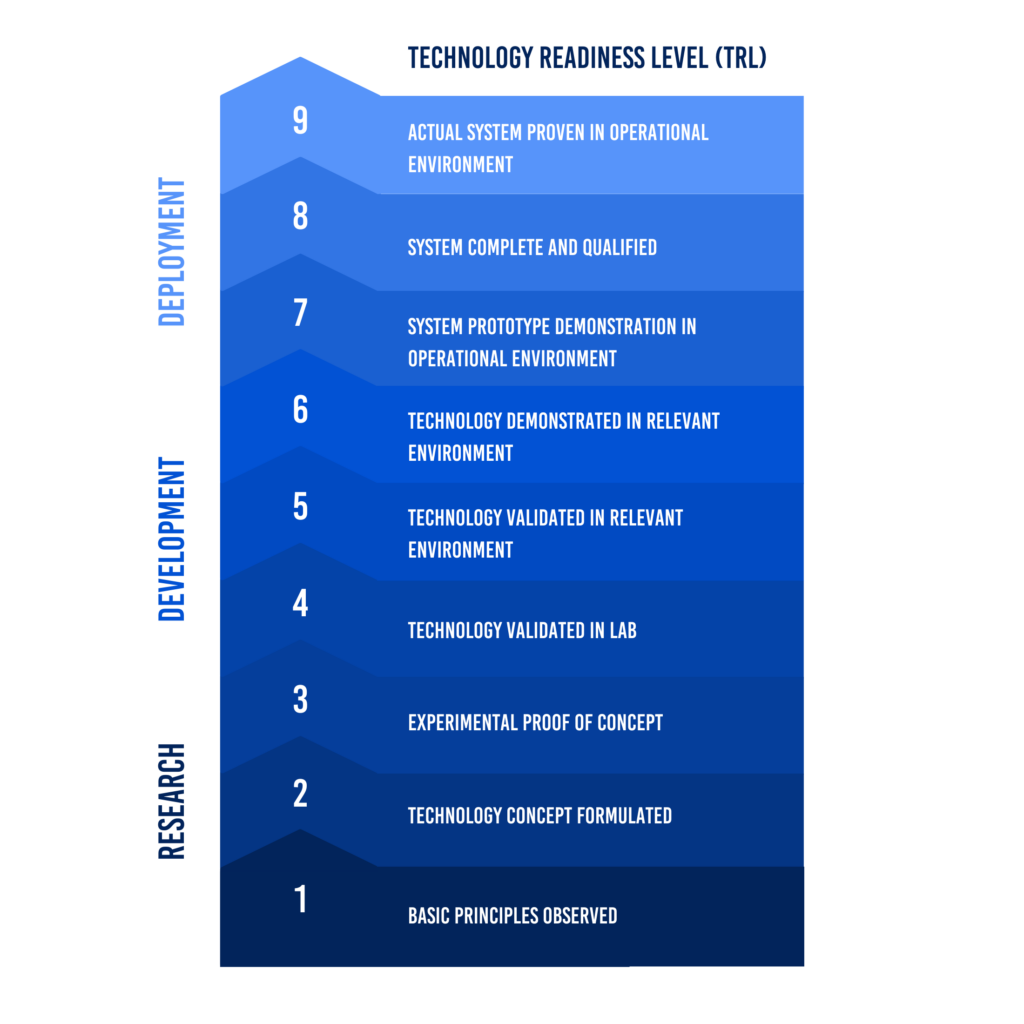 Many industries have adopted TRLs for good reasons – they offer many advantages in the assessment of technology for a wide range of applications.

When used as part of a wider set of tools, TRLs can help to inform key decisions in development and implementation with a consistent structure to refer back to.

Some of the key advantages include:

Despite the benefits that TRLs can bring, they do naturally come with characteristics that limit their utility when applied in real-world engineering.

One of the key limiting factors is that the model is technology-centric and not user-centric, meaning that whilst the technology may meet a verified level of ‘readiness’ to operate, it doesn’t factor in ease of use, human support and user satisfaction. This can leave a doubt around whether or not the technology is in fact human-ready.

Along with that, the scale doesn’t necessarily measure the appropriateness of the technology, as it purely relies on its maturity. However, a more mature system doesn’t always mean that it’s the easiest or safest technology to use or implement.

There are a number of other limitations that come with using TRLs, but as we mentioned earlier, they are a useful method to follow when used as a wider set of tools.

Learn the key differences between explicit and implicit FEA, and the areas in which bot...

How engineers can use PV Elite

PV Elite is one of many industry-leading software solutions distributed by DOCAN. Learn...

An insight into fitness for service assessments by DOCAN

FFSA is a crucial method used in the engineering of pressure systems and components. ...

Want to know if we can help with your project? Contact us today